Audio-Tour of things worth hearing around the Schöllenen Gorge

The journey through time starts at the Schöllenen Gorge parking lot. At 9 stations, visitors learn more about well-known and lesser-known sights such as the Suworow Monument, the Devil's Bridge and other topics, closely linked to the varied history of the Ursern Valley.

The stations along the Schöllenen Gorge circular trail invite you to pause, listen and marvel. What is the story behind the 12-metre-high memorial cross? How was it possible to overcome the thundering Schöllenen Gorge back then and why did the devil have a hand in it? These and other questions are answered on the audio tour "Mystical Schöllenen". What the eyes perceive is accompanied and supplemented by audio sequences that can be played on the smartphone. The tour takes around 60 minutes, whereas the walking time is 30 minute, the various stations are indicated with signs.

Stagings in the Devil's Bridge

The Schöllenen Gorge has one more tourist attraction to offer. On both sides of the pedestrian and bicycle subway, teasers draw attention to the new stagings in the Devil's Bridge.

Since July 2022, the wild gorge, which for a long time was a difficult obstacle to overcome on the way over the Gotthard, has been enriched by an attraction.

With the help of state-of-the-art multimedia technology, a different theme is staged in each of the three rooms or portal windows. Thus, in the bridge body of the Devil's Bridge, the Gotthard Postal Service, the Devil's Legend and the Böögg, among other things, are staged one after the other.

1200 - 1900 Century
For a long time the Ursern valley was an important starting point for the crossing of the Alps. It connected northern and southern Europe via the Gotthard Pass, the west via the Furka Pass and the east via the Oberalp Pass. The importance of the region was demonstrated mainly by the fact that in order to cross the Alps travellers only had to cross but one pass, the Gotthard. This advantage was of great importance in all epochs.
As early as 1200, the Schöllenen Gorge, which was difficult to walk through, was opened up with two wooden bridges, the "Twärren" Bridge and the"Stiebender Steg" Devil's Bridge with the technical skills most probably coming from the Walser people. Finally, the Schöllenen Gorge no longer had to be troublesomely bypassed.

The first stone bridge was built around 1585 and the first documents with the name “Devil's Bridge” appeared at this time. The first stone bridge lasted just 60 years before, in 1640, a big storm destroyed the bridge and flooded the whole valley. Until the damage was repaired the gorge had to again be bypassed over the difficult Bäzberg route or through the Riental via Gütsch. The repair costs were covered within a few years by increasing customs duties. Nevertheless, it was clear that the infrastructure of the Schöllenen had to be improved and made safer.
In 1707 the first project to bypass the Kirchenbergfels and thus the "Twärren" Bridge was presented. Pietro Morettini, an experienced fortress builder from the Maggia Valley, dared to break through the cliff rock and took over the tunnel construction. He managed this in only eleven months and is considered today to be the builder of the first alpine tunnel ever. The original dimensions of the tunnel (Urnerloch) were 2.1 m in width, 2.4 m in height and approx. 60 m in length. Morettini was so mistaken about the costs that he was bankrupt after the completion of the tunnel. However, the people of Ursern and Uri recognized the unbelievable benefits of the tunnel and decided to increase customs duties once again. The improved connection ensured many more goods and people could be transported. In addition, the local goods, such as the famous "Ursener Käs" or the crystals of the valley, were now traded throughout Europe. By increasing customs duties, Morettini was also made debt-free and even received a bonus. The whole infrastructure suffered again and again from the intensive transit and trade traffic. Bridges and roads were also badly affected by the forces of nature and the warlike actions around the Gotthard Pass even threatened to interrupt the entire pass connection. Economic interests in the South as well as to the North of the Gotthard Pass formed the base for investments to finally make the Gotthard connection a viable and all-weather route. After a few delays, the expansion was carried out in two stages between 1818 to 1826 and 1826 to 1830.
Now the mule trail had become a road for carriages and sledges, however this era did not last long either. The 15-kilometer Gotthard railway tunnel from Göschenen to Airolo opened in 1882. This tunnel was a pioneering achievement and was considered the longest tunnel in the world until 1905. At the same time, it meant the end of the stagecoach and the busy pass traffic over the Gotthard Pass. After a long tradition of mule-tiring , the journey over the Gotthard finally shortened from several days to several hours in around 100 years. During the heyday of the drovers, a journey from Lucerne to the Italian border took a good 5 to 7 days. The same distance could be covered in 24 hours with the introduction of the stagecoach and the opening of the railway line shortened the journey again to about 9 hours. This shows the fast change which the local population, at the centre of transit traffic, had to adapt to time and again.

The narrow rock bar above Göschenen had always blocked access to the Gotthard and thus to the transition to the South. It therefore proved to be extremely difficult to build a bridge there.

The legend, which tells of the futile efforts of the people of Uri to build a mule track through the narrow Schöllenen gorge and a stone bridge at the point where the young Reuss river pushes through vertical rock walls, shows how difficult the situation was. In his despair, the "Landammann" shouted: "Shall the Devil build a bridge". Then the Devil appeared and said, "I will build a bridge for you. But the first soul to go over it shall be mine".

The people of Uri agreed to the trade. After three days a bridge arched over the Reuss. On the other side the Devil sat and waited for his reward. Instead of a human, however, the people of Uri sent a billy goat over. "You may keep it" they shouted, "here you have the first soul that crosses the bridge!"

Full of anger the Devil tore the billy goat apart and found a huge stone to destroy the bridge with. Then an elderly women came by, recognized him and carved a cross into the stone. When the Devil saw this, he missed his target and the stone landed in the valley below, not far from Göschenen and it has been lying there ever since. For the construction of the motorway the "Devil's Stone", as it is called, was simply moved to a new location.

THE HISTORY OF GENERAL SUWOROW

The large monument at the Devil's Bridge in the Schöllenen Gorge below Andermatt, which is dedicated to the Russian General Alexander Suworow, cannot be overlooked.

The Suworow monument commemorates the fighting that took place in the Schöllenen Gorge on 25 September 1799. Russian troops under General Alexander Vasiljevic Suworow fought against Napoleon's soldiers and finally defeated the French.

On September 15, 1799, Suworow reached Monte Ceneri with 21,000 men and defeated the French at the Gotthard Hospice on September 24, 1799. The French then filled the "Urnerloch" with rubble and blew up the Devil's Bridge. One day later Suworow brought in wooden beams, tied them together with the officers' sashes, thus erecting an emergency bridge and forced the passage, but at great loss.

The monument was erected in 1899 by Russia in honour of Suworow and the fallen soldiers. Russian President Dmitri Medwedew visited it on the occasion of his Swiss state visit on 22 September 2009. 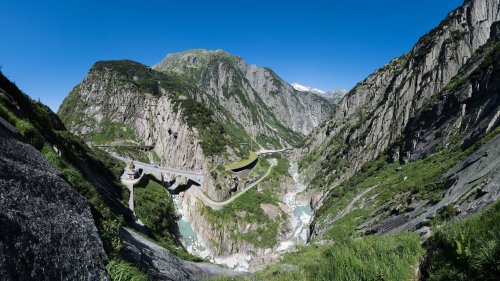 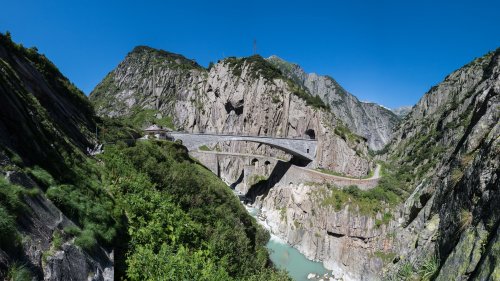 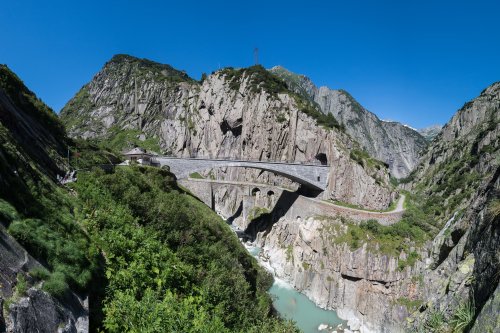 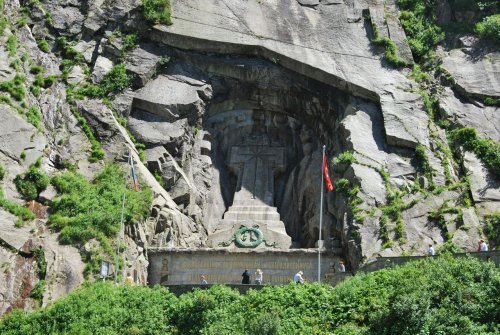 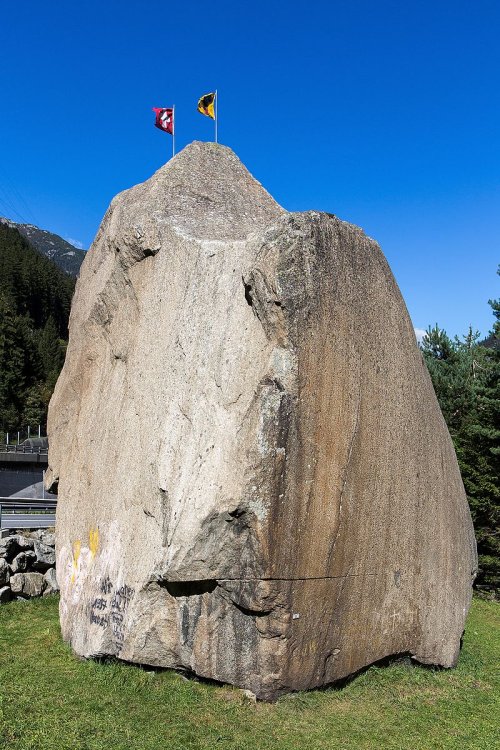 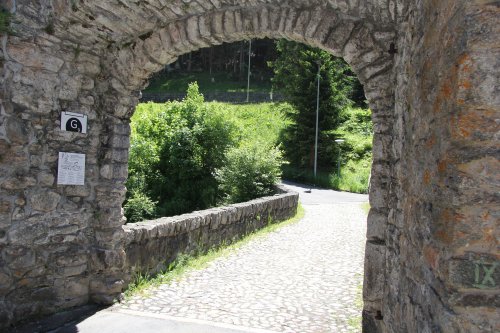 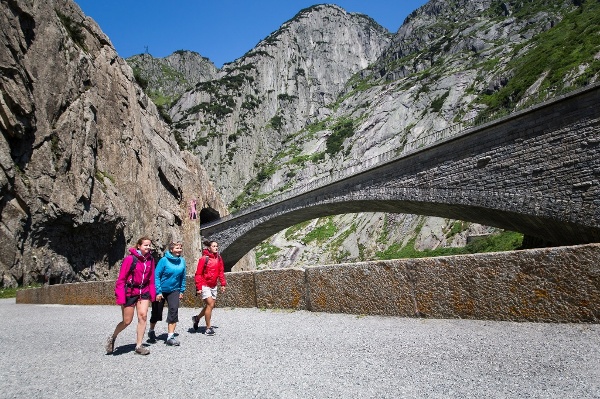 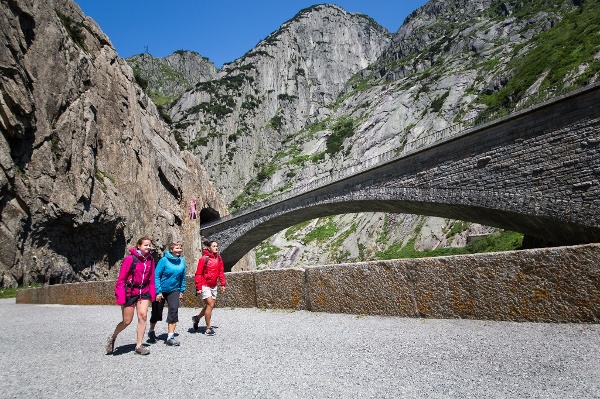 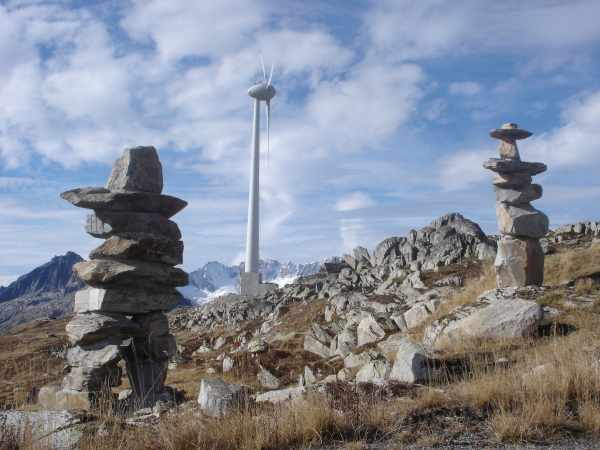 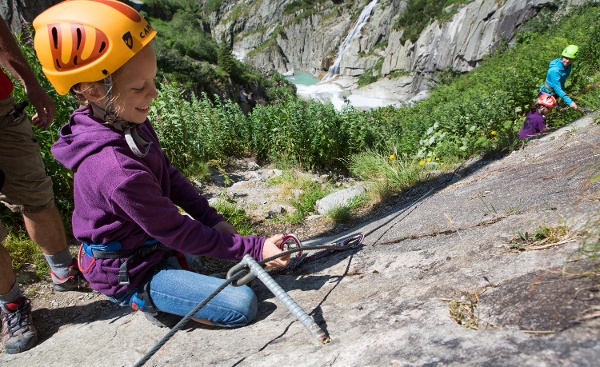